To share your memory on the wall of Ray Jessie, sign in using one of the following options:

Ray Jessie, 86, of Grayson, passed away Tuesday, February 25, 2020 at the Community Hospice Care Center in Ashland.

Ray Jessie, 86, of Grayson, passed away Tuesday, February 25, 2020 at the Community Hospice Care Center in Ashland.

Husband, father, brother grandfather, great grandfather. Ray Jessie was the toughest man you could know. Born April 20, 1933, in Olive Hill, Kentucky, he grew up as the baby of a family of 12 and was the last surviving child. He worked as farm hand and attended a one-room schoolhouse. Ray met the love of his life and married Lucille Lambert in 1961 and for their honeymoon began their life of hard work with a broom and mop fixing up their first place. They moved to Evermans Creek where they raised their 4 children. Ray and Lucille worked hard and raised tobacco and cattle until the last season he was physically able. Ray was loved by all and was the "Peacekeeper" and wise man on the creek as many evenings were spent talking with his friends sitting down at the barn. Ray enjoyed working on the farm talking to everyone and anyone, eating sweets, spending time with his family, watching the weather report, and bringing a laugh to anyone he met.

Funeral services will be Thursday, February 27, 2020, at 2:00 p.m., at the Sparks Funeral Home in Grayson, Ray Simmons, minister. Burial will follow in Hillcrest Cemetery. Visitation will be Thursday, 11;00a.m. until service time at the funeral home.
Online condolences at www.sparksfh.com
Read Less

To send flowers to the family or plant a tree in memory of Ray Douglas Jessie, please visit our Heartfelt Sympathies Store.
Print

We encourage you to share your most beloved memories of Ray here, so that the family and other loved ones can always see it. You can upload cherished photographs, or share your favorite stories, and can even comment on those shared by others.

Love, Derick, Caroline, and Brenna sent flowers to the family of Ray Douglas Jessie.
Show you care by sending flowers

Posted Feb 27, 2020 at 10:37am
sorry to hear ray passing he was a great man he was a icon I use to go up there an we would sat on the porch an sometimes around the barn he wood tell me about my dad he had great memories
Comment Share
Share via:

Posted Feb 26, 2020 at 07:08pm
I'm so sorry to hear of Ray's passing. He was a wonderful man that I will never forget. My thoughts & prayers go out to Lucille, Jeff, Hayden, Danny & Donna & all the family.
Heather Bays
Comment Share
Share via:
LB

Posted Feb 26, 2020 at 08:44am
Wishing you peace and comfort. And wishing you the courage to face the days ahead. Please know that everyone is in our thoughts.

Flowers were purchased for the family of Ray Jessie. Send Flowers 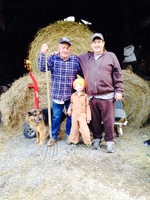 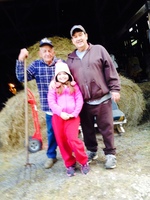